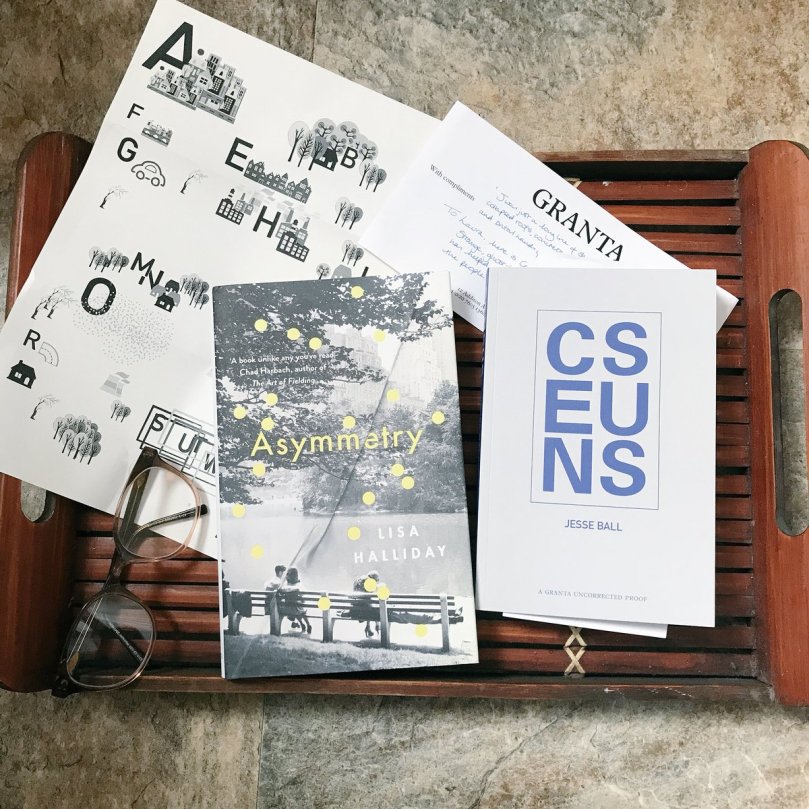 an experimental series: more than a tweet, less than a review, with refreshments
lacking all discipline, essentially

Recently I took a trip to Birmingham for work, and arrived early enough to have lunch. I’ve only been to the city once before, to speak at last year’s Birmingham Book Festival about the book Know Your Place, where I ticked the venue, adjoining Birmingham’s new chocolate-box shaped, gold gilded library, off a meagre sight-seeing list. I feel positively about the city, because in the twice I’ve been there on whistlestop trips, I’ve found unanticipated pleasures. Last time, reaching the end of a run down, run of weekends spent at book festivals and on a lot of trains I huddled in my hotel eating takeaway Chinese food from Henry’s on St Paul’s square, where I watched families eat while I waited in the lacquered bar with tissues spilling out of my pocket. The square was knee-deep in autumn leaves, and the vegetarian wontons in sweet and sour sauce turned out to be the best Chinese food I’ve had since becoming a vegetarian a couple of years ago, and a real comfort.

Recently through the letterbox came one of the more elegant book packages I’ve received, containing Asymmetry by Lisa Halliday (review pending for Review 31) and Census by Jesse Ball, complete with a print, both spring 2018 publications from Granta. For this brief trip to Birmingham I packed Census by Jesse Ball (Granta), and a second book to read on the late flight back.

“Each census has its own shape, and should sit on an agreed rib.”
Census by Jesse Ball opens with a tribute to the author’s brother, who had Down’s Syndrome, and passed away at the age of 24. “What is in my heart when I consider him and his life is something so tremendous, so full of light, that I thought I must write a book that helps people to see what it is like to know and love a downs’ syndrome girl or boy.” This shapes what comes next, in the form of a father and son duo. The father, who is suffering from an illness which foretells certain death in a matter of months, decides to spend his remaining time travelling as a census taker. Pre-arranging to send his son back by train to a neighbour who will assume care (a long journey, but one the man is certain will be successful, observing that his son easily enlists assistance), the two set off together in a car, sleeping in it as they go. It is no ordinary census: although there are recognisable qualities of archiving, ritual, and codes of behaviour, those counted are marked by tattoo, and there is a sense that what is gathered is something undefined but more momentus and intrinsic to human experience than mere age and occupations. The towns they catalogue are ordered from A to Z, a neat rounding off, as the father takes stock of his final days with his son. Different towns have different qualities. Some citizens are happy to see the census takers, others are wary, and a few downright hostile. Meetings between census takers and citizens are a vehicle for character studies in a series of short, often eccentric, portraits of townspeople. Some are funny, often aided by the son’s observations. A few take the opportunity to reflect on their own history. It is an odd, and touching book told in simple sentences, and its playful structure may appeal to readers of Perec or Calvino. It ends by closing the parenthesis on reality, with photographs of the author’s younger brother as described in his foreword. I finished it over lunch. 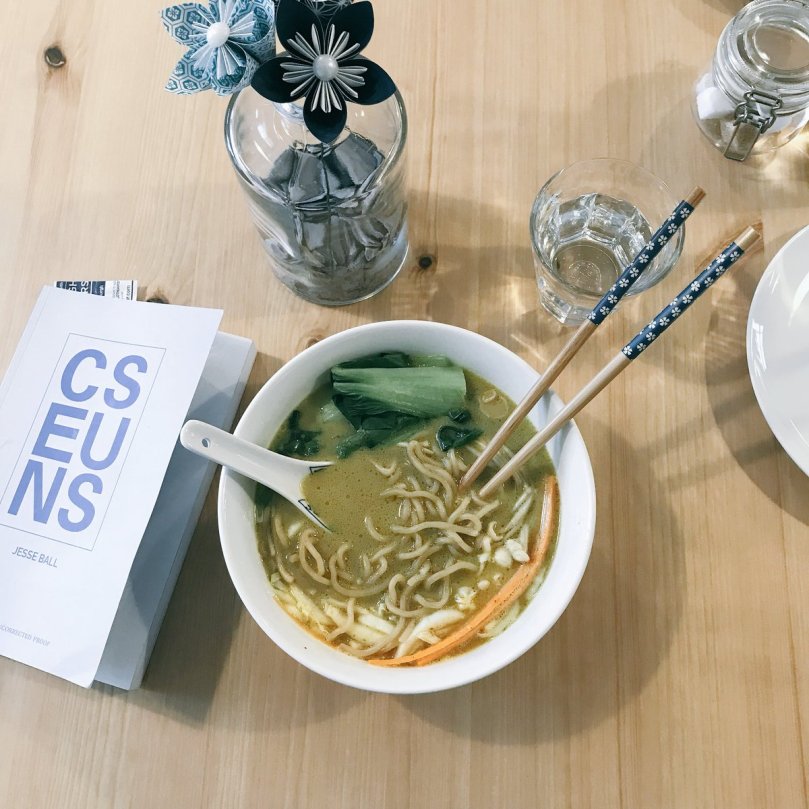 Lucky Duck is a new broth-and-noodle restaurant in the jewellery quarter. The night before my early train I spent a bit of time searching review sites without anything much appealing, Henry’s, the Cantonese which had previously comforted me when I brought home a takeaway bag to my tucked in hotel sheets was not open at lunchtimes. I didn’t find anything I wanted especially to try until I searched Twitter, and on the day I made a pilgrimage to try it out, through streets now cleared of their autumn leaves. Will walk for noodles (or dumplings, or tempura…). Opened only a few days before when I visited in February, the sparsely decorated pine table interior of Lucky Duck matched a simple menu, and the staff were eager to be welcoming. I ordered the vegatarian option of spicy coconut broth, enoki mushrooms and Chinese slaw bowl. Noodles appear to be handmade on premises. If I’d had more time, I’d have

ordered the aubergine and peanut bun too instead of watching it be delivered to nearby tables. The broth was good and light; I can still remember enjoying sipping the coconut flavour. Glasgow’s Ramen Dayo has a richer, deeper soy-based vegan broth and more memorable, chewier ramen noodles. But if I’m ever back in Birmingham, I’d probably pay it another visit, followed by coffee further down Caroline Street at The Eight Foot Grocer.

On my way home from Birmingham, late, after eating dinner of a sandwich walking to an airport departure gate, I opened the second book I’d brought, Evening Primrose by Kopano Matlwo. I’ve had the proof lying around for a while, and timed my reading to coincide with the launch of the paperback. Matlwo is a young South African author whose first novel at the age of 21 became a bestseller, and the second won prizes. Described as “South Africa’s Chimamanda Ngozi Adichie” by Rosie Rowell in the Bookseller, this was my first exposure to her writing. 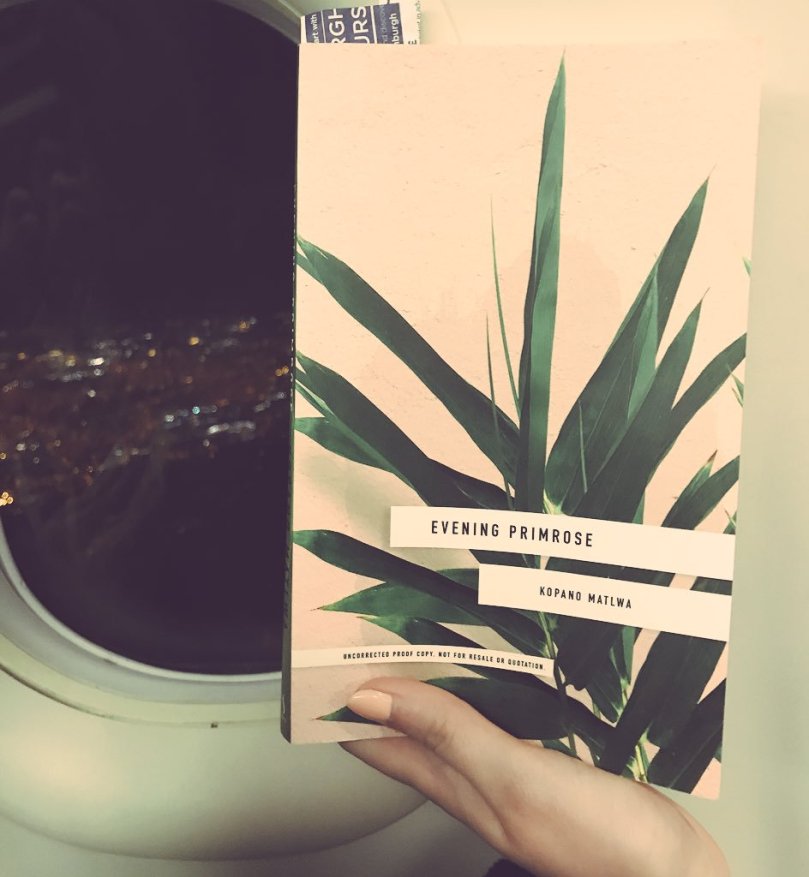 Like flights previous, I was glad to open a book which gripped me straight away with its direct voice, a bit like listening to a friend talk about their day. Masechaba is the student doctor protagonist facing gruelling workloads on hospital wards while she adjusts to new independence from her family, new friends, and a new flat. We learn she has always suffered from extremely heavy periods, as well as the shame that comes with bloodstains, ineffective treatments, the frustration of her mother and activities being out of bounds; she dwells on the time she marked her brother’s new car seat with her menstrual blood. Masechaba becomes friends with Nyasha, an older medic from Zimbabwe, whose distance affords a critical eye over increasing racial tensions in South Africa. After Masechaba becomes increasingly politically vocal, trying in part to win the esteem of the female friend she looks upto, she is raped and suffers from poor metal health, relying on her mother once again to ease back into every day life. The novel becomes gradually harder hitting, examining racism and sexism on the medical ward as a microcosm for wider society, and the reader becomes confidante to Masechaba’s confessional, chatty delivery, drawn into her world as it becomes troubled. I enjoyed the minutia of the friendship and Masechaba’s complex period routine. Evening Primrose is an eye-opening, contemporary young feminist window into post-apartheid xenophobia.